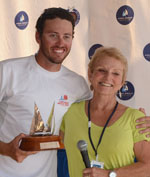 Hamilton, BERMUDA: Oct. 10, 2012 – Taylor Canfield not only led his Chicago Match Racing Center team to win the King Edward VII Gold Cup at the 2012 Argo Group Gold Cup, but he also won the second annual Jordy Walker Trophy as well. The Jordy Walker Trophy recognizes the most improved young match race sailor who competes in Alpari World Match Racing Tour events or other events that automatically qualify a skipper for a Tour event.

“Taylor Canfield,” said Brian Billings, President of the MRA and Chairman of the Argo Group Gold Cup, “has earned this recognition through his performance in match race events like the Chicago Match Cup, the automatic qualifier events in the Grand Slam Series and his victory here at the Argo Group Gold Cup. With his 18-3 record over the world’s best match race sailors in the Gold Cup, Taylor is the clear winner of the Jordy Walker Trophy for 2012.”

“Winning the Jordy Walker Trophy is a highlight for me,” Canfield said, “and I’d like to thank the Match Racing Association for the award. Jordy has had a huge impact on youth development of sailing in Bermuda but also throughout the Caribbean.”

“One of the biggest examples of this,” Canfield added, “was his role in changing the Bermuda Gold Cup to the modern day format. [The Gold Cup has a 24-team format rather than 12 like many other events]  This has allowed young match racers like myself the opportunity to compete against not only some of the best match racers in the world but also some of the greatest sailors of all time.”

“The passion of people like Jordy,” he concluded, “has raised the bar for modern day match racing. It is an honor to receive this award in Jordy’s memory.”

At 23, Taylor Canfield is one of the brightest stars to recently come out of the St. Thomas Yacht Club. He follows in the wake of Peter Holmberg who won the King Edward VII Gold Cup in 2001. Canfield came to Bermuda for the Renaissance Re Junior Gold Cup with Holmberg in 2003 and got his inspiration for match racing then.

Canfield led the Boston College sailing team to many collegiate championships and has now has devoted himself to match race sailing. He is the current sailing director at the Chicago Match Race Center. He was ranked 11th in the open ISAF rankings going into the Gold Cup.
He has recently won the four-event 2012 Grand Slam Match Race Series, winning the Chicago August Grade 2, coming second in the Detroit Cup, finishing seventh in the Knickerbocker Cup and taking second place in the Oakcliff International Grade 2 event.

Taylor has made his presence known on the Alpari World Match Racing Tour (AWMRT) and is now ranked 9th. He finished 12th at the 2011 Gold Cup. This year he finished 4th at the AWMRT’s new event, the 2012 Chicago Match Cup, and 3rd at the 2012 Congressional Cup. Taylor looks to continue climbing the rankings. He is hoping for an invitation to the AWMRT championship at the Monsoon Cup in December and will bid for a 2013 AWMRT Tour Card.
The namesake of the trophy, Jordy Walker, was a man who gave his heart and soul to sailing and the sport of sailboat racing. He used his time, money and talent to promote the sport he loved, to introduce the modern format of match racing to Bermuda. And, in fact, he brought match racing to the world in 1988 through the establishment of the WMRA (now the MRA) and its match racing championship events he helped establish around the globe.

The Jordy Walker Trophy is on permanent display in the King Edward VII Gold Cup Trophy display case in the entrance foyer of the Royal Bermuda Yacht Club.

This year marked the 62nd staging of the King Edward VII Gold Cup, with previous winners including some of the greatest names ever to match race. Since the event was reformatted to be an event under the Match Racing Association in 1985, multiple winners include Chris Dickson (NZL), Russell Coutts (NZL), Peter Gilmour (AUS), and Ben Ainslie (GBR).