Tour Card Holders 'All In' for Argo Group Gold Cup 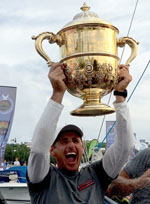 Francesco Bruni, (ITA) Luna Rossa Challenge, will be back to defend his 2013 title. Bruni who had been tactician with the Italian America's Cup Team Luna Rossa won 17 out of 20 races to put his name on the King Edward VII Gold Cup. Visit the islands of Bermuda October 21-26 for the 2014 Argo Group Gold Cup.

Invitations were sent to the top 12 skippers in the current ISAF Open Match Race rankings. This includes the 8 Alpari WMRT Cardholders and 4 others who round out the ISAF leaders group. In addition, invitations went to 3 previous Gold Cup winners from the current America's Cup rosters and another America's Cup skipper who has yet to win the Gold Cup.

Francesco Bruni, (ITA) Luna Rossa Challenge, will be back to defend his 2013 title. Bruni who had been tactician with the Italian America's Cup team won 17 out of 20 races to put his name on the King Edward VII Gold Cup with other America's Cup notables— Russell Coutts, Chris Dickson, John Kolius, Peter Gilmour, Rod Davis, James Spithill and Sir Ben Ainslie. Bruni would also like to take home the winner's $50,000 share of the $100,000 prize purse.

When asked if he would feel more pressure this year as defending champion Bruni replied, "Every race is an event unto itself. A good result gives you the awareness that the team is going in the right direction, but the commitment and the determination with which you face a race does not change based on a win or a loss. We are always focused before an important event and we definitely want to repeat last year's result. Needless to say, excessive pressure is never a good friend."

Bruni had raced in Bermuda's Gold Cup once before, in 2011, when he reached the semi-finals. In 2013 he came straight from sailing in a 72 foot AC34 foiling cat and in 2014 he will come from training with the Luna Rossa Challenge for AC35.

"The basics of the match race remain the same," Bruni said, "whether you are racing on a monohull or a catamaran. For sure, there is a huge difference when you go from the AC72 to the IOD: in San Francisco it was the pure speed to make the difference; in the World Tour the aggressiveness in the pre-start and good tactics are what determine the difference between victory and defeat."

"The Alpari World Match Racing Tour is one of the most selective international competitions, he noted. "Each team is a potential winner and you compete on equal terms, which makes it the best field to measure ourselves in a real race."

Asked to recall his best and worst moments in 2013 he said, "My best memory of the Argo Group Gold Cup and Bermuda was last year's victory with Luna Rossa, especially so because I wasn't expecting things to go so well. The guys who were there with me did a great job and we beat Ben Ainslie in every start of the tough 3-2 final. I think we deserved the win. The worst memory of Bermuda was when I take the flight back home."

Taylor Canfield (USVI) the 2013 Tour winner and ISAF World Champion and winner of the Gold Cup in 2012 will also be back in the chase for his 2nd Gold Cup title.

Commenting on the Bermuda experience Canfield said, "The Argo Gold Cup is a classic event on the Alpari World Match Racing Tour. It allows younger up and coming teams to get a taste of the Tour and a chance to compete against the best match race teams in the world."

"Having sailed in 3 Argo Gold Cup's as a non Tour Card Holder and one as a regular on the Tour, we are really looking forward to coming back again. While the IODs are quite unique compared to boats sailed in any other venue, the variety of sailing conditions and beautiful weather make this event one of the best in the world. There is an incredible line up on the tour this year, and it is an honor to sail against the best."

The RBYC sent automatic invitations to the 8 Alpari World Match Racing Tour Card Holders and 9 more invitations went to top sailors in the ISAF Match Race 'Open' Rankings, to some past participants in the Gold Cup and to skippers with top match racing records over years on the match racing scene. Two more entries, unless they have already accepted from an invitation, automatically come from winners of qualifying events - the Knickerbocker Cup and the Bermuda National Match Race Championship.

The 2014 event will be sailed with the same 20-team format used for the first time in 2013. This Argo Group Gold Cup format is unique on the Alpari World Match Racing Tour. It now allows for two 10-team groups. Skippers in each group are ranked and divided by Alpari World Match Racing Tour officials and the organizers at the Royal Bermuda Yacht Club.

Rankings in the groups are based on international AWMRT and ISAF rankings and other performance factors. Each group will sail a round robin with their top four teams moving directly to the quarterfinals.

October is a perfect time to sail and vacation in Bermuda and the Argo Group Gold Cup is a showcase 'spectator' event culminating in the exciting finals weekend October 25th-26th. All Gold Cup racing is spectator friendly with courses set in Hamilton Harbour from just off of the RBYC marina wall to the harbour shore along the gardens of the Fairmont Hamilton Princess Hotel. Special rates for Gold Cup week will be available at the Hamilton Princess Hotel. www.fairmont.com/hamilton-bermuda/

This year will mark the 64th staging of races for the King Edward VII Gold Cup Trophy, with previous winners including some of the greatest names ever to match race. Since the event was reformatted to be an event under the Match Racing Association in 1985, multiple winners include Chris Dickson (NZL), Russell Coutts (NZL), Peter Gilmour (AUS), and Ben Ainslie (GBR). The 2013 Defending champion is Francesco Bruni (ITL).

About Argo Group:
Working Together to Serve Specialty Markets
Argo Group International Holdings, Ltd. (NasdaqGS: AGII), is an international provider of specialty property and casualty insurance, reinsurance and managed risk solutions. The companies that make up Argo Group share a firm commitment to working together with our independent agents and wholesale and retail brokerage partners to deliver innovative products for niche markets.

Argo Group clients and shareholders alike benefit from our deep understanding of the markets we serve, our ability to manage through all insurance cycles, our well developed and prudent risk management practices and controls, and our track record of growth and profitability.

Through our operating companies, we offer a comprehensive line of high-quality products and services designed to meet the unique coverage and claims-handling needs of our clients in four business segments: Excess and Surplus Lines, Commercial Specialty, International Specialty and Syndicate 1200 at Lloyd's.

At Argo Group, we've built a company with a fundamental purpose of securing the future and a straightforward vision to achieve outstanding results realized together.

Organization-wide, our strategy—easy to define and rewarding to deploy—is to grow hand-in-hand with our clients.

About Bermuda
Although Bermuda is an Atlantic island paradise in its own right, many people mistakenly believe Bermuda is part of the Caribbean. In fact, the island rests hundreds of miles north of the Bahamas, a mere 650 miles east of North Carolina. Flights from New York and other eastern US cities are less than two hours. From London, direct flights are about seven hours.

All of Bermuda fits in a cozy 20.7 square miles surrounded by 75 miles of dramatic coastline. Bermuda is famous for hospitality and sparkling pink-sand beaches. Activities include racquet sports, dramatic golfing, spectacular spas, and cultural festivals in all seasons. Of course Bermuda is famous for sailing as a destination for ocean races from Marion, Newport, and Charleston, for Cruising rallies for other East Coast ports and as host to many national and international competitive events.

From chic international cuisine in posh dining rooms to conch stew and local Rockfish at a roadside café, we have a taste to please every palate and budget. While Bermudians do value island tranquility, we like to have a bit of fun, too. From swanky clubs to friendly neighborhood pubs, these after-hours establishments satisfy every thirst. Cocktail in hand and warm sea breeze at your back, set sail on one of our evening cruises along our famous coastline.

For details on all the excitement and events Bermuda has to offer, call your travel agent or visit us at www.bermudatourism.com

The Alpari World Match Racing Tour awards over US$1.4 million in prize money with points awarded at each event culminating in the crowning of the "ISAF Match Racing World Champion". The prize fund includes a US$500,000 overall Tour Bonus for the top teams in the Championship.

Events take place in identically supplied racing yachts to place the focus on teamwork and skill. Racing takes place close to the shore so that spectators and fans can follow the racing in a virtual on-the-water stadium.

Media and television highlights coverage reaches in excess of 183 countries across 51 broadcasters around the world. International television distribution is managed by global sports and entertainment agency IMG.

Alpari is more than a forex broker, it's a complete trading service, offering cutting-edge trading technology and free research and training packages. Alpari provides forex trading services worldwide on a range of cutting-edge trading platforms, including the popular MetaTrader 4 (MT4). Alpari has been working with the developers of MT4 since the beginning and that is why we are able to offer a unique trading package on the platform. Trading accounts start from USD200 and traders can use software programmes called Expert Advisors to automate their trading.

Alpari has a dedicated global sponsorship programme because the company believes in sharing its passion with individuals, teams and supporters who value excitement, determination and loyalty as highly as we do. Our global sponsorship portfolio helps us reach out to traders and potential traders in key regions around the world.

Forex, spread bets and CFDs are leveraged products. They may not be suitable for you as they carry a high degree of risk to your capital and you can lose more than your investment. You should ensure you understand all of the risks.