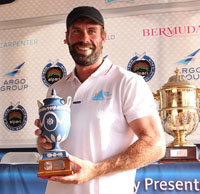 At the 2013 Argo Group Gold Cup, Iain Percy was awarded the Wedgwood Heritage Trophy. Photo by Charles Anderson/RBYC.Artemis Racing has entered the 2014 Argo Group Cup. It will be a first for America’s Cup 35 helmsman Nathan Outteridge. He will sail with team manager Iain Percy — main and tactics, and with teammates Iain Jensen and Christian Kamp.

Percy and Kamp previously crewed with Sir Ben Ainslie and lost in the 2013 finals to Francesco Bruni, (ITA) of Team Luna Rossa, now skipper of the Italian America’s Cup Team. Bruni won 17 out of 20 races in 2013 to put his name on the King Edward VII Gold Cup. He will return to defend his title.

Hamilton BERMUDA, September 8, 2014 – In an exciting decision for the Alpari World Match Racing Tour and the Argo Group Gold Cup, event Chairman Past Commodore of the Royal Bermuda Yacht Club Brian Billings is pleased to confirm that Artemis Racing will come to Bermuda in October for the 2014 Argo Group Gold Cup match races. The team will enter with its crew composed of Artemis Racing’s helmsman Nathan Outteridge, team manager Iain Percy, and crewmembers Iain Jensen and Christian Kamp. They will join the 20-team fleet in the next battle for the King Edward VII Gold Cup.

“Artemis Racing will be an exciting addition to the 2014 Argo Group Gold Cup,” said Past Commodore Billings. “With the addition of Artemis Racing, we will have two promising America’s Cup challengers represented in Bermuda. Francesco Bruni, Team Luna Rossa helmsman, will return to defend his 2013 Argo Group Gold Cup title. We hope to see some exciting matches between these two teams.”

Iain Percy and Nathan Outteridge commented on the Argo Group Gold Cup and racing on the Tour as training for the America’s Cup 35 racing coming on them quickly.

TW— You have sailed in Bermuda before with your friend but AC rival Ben Ainslie. How will this event be different without him?

IP— Ben, myself and the rest of the Origin team enjoyed a lot of success on the Alpari World Match Racing Tour, especially in Bermuda, where we always felt at home. The reality though was it took our team, and my partnership with Ben, almost a year to develop before we found success in this style of racing. Artemis are lucky to also have Christian Kamp, who was another consistent member of Origin match race squad with us, and between Christian and myself we will have to try and remember how we used to sail the classic IODs!

TW— Your recent decision for Artemis Racing to enter the Argo Group Gold Cup is exciting for the event and the Tour. Do you think match racing on the Tour and in Bermuda is good training for AC35?

IP— At the end of the day the America’s Cup is a match race. As a team, we are relatively inexperienced on the match racing side and so the Gold Cup is a great opportunity to practice.   TW— Nathan Outteridge is a fantastic sailor… 49ers, Moths, Olympics, world championships, and more. How do you think the team members who are new to the Gold Cup will adapt to the Bermuda IODs?

IP— I imagine he will ask us when the IODs will start foiling a few times… that is one he normally asks us "slow boat sailors"!

TW— What do you think of another match-up with Francesco Bruni who defeated your team last year in the finals?

IP— Bruni and the Luna Rossa boys sailed really excellently in last year’s final, and we were comprehensively beaten. We had been out of the match racing game for a while and were impressed by the improvement not only of Bruni but the rest of the Tour teams. It will be extremely difficult for Nathan in his first match race competition and for us as a new team, but I know we will all enjoy the challenge and take a lot from the lessons.

TW—To Nathan Outteridge, Nathan, this is your first Argo Group Gold Cup. How do you think you will adapt to the classic IOD style of racing?

NO— Obviously it will be very different from what I am used to. The classic IOD style of boats is nothing like the foiling machines that I am used to sailing. Having said this Iain has sailed this style of boat quite a bit. I'm sure with his guidance I will do just fine.

TW— Will you and the team be getting to Bermuda early for practice?

NO— We plan to come over a few days before the event to get some training in on the boats and also learn the waters. It will be the first time the four of us, Iain, Goobs (Iain Jensen), Christian and myself, would have ever raced together. It will be important for us to make the most of the training time.

TW— What do you think of the potential competition against the defending champion Francesco Bruni who is now Team Luna Rossa's Skipper?

NO— Francesco is a great sailor and I am sure he will be difficult to beat. Given the lack of experience I have in Match Racing I think I will be on a steep learning curve and hopefully we can make it through the rounds and into the finals.

Taylor Canfield (USVI) the 2013 Tour winner, ISAF World Champion and winner of the King Edward VII Gold Cup in 2012 will also be back in the chase for his 2nd Gold Cup title.

“The Argo Gold Cup is a classic event on the Alpari World Match Racing Tour,” Canfield said. “It allows younger up and coming teams to get a taste of the Tour and a chance to compete against the best match race teams in the world.”

Eleven more teams have confirmed their invitations to compete and one team has yet to confirm its participation.

Match racing for the King Edward VII Gold Cup Trophy is scheduled to start Tuesday October 21st on Hamilton Harbour in Bermuda. The finals are scheduled for Sunday October 26th.  The 2014 event will be sailed with the same 20-team format used in 2013. This Argo Group Gold Cup format is unique on the Alpari World Match Racing Tour. It allows for two 10-team groups.  Skippers in each group are ranked and divided by Alpari World Match Racing Tour officials and the organizers at the Royal Bermuda Yacht Club.

Rankings in the groups are based on AWMRT and ISAF rankings and other performance factors. Each group will sail a round robin with their top four teams moving directly to the quarterfinals.