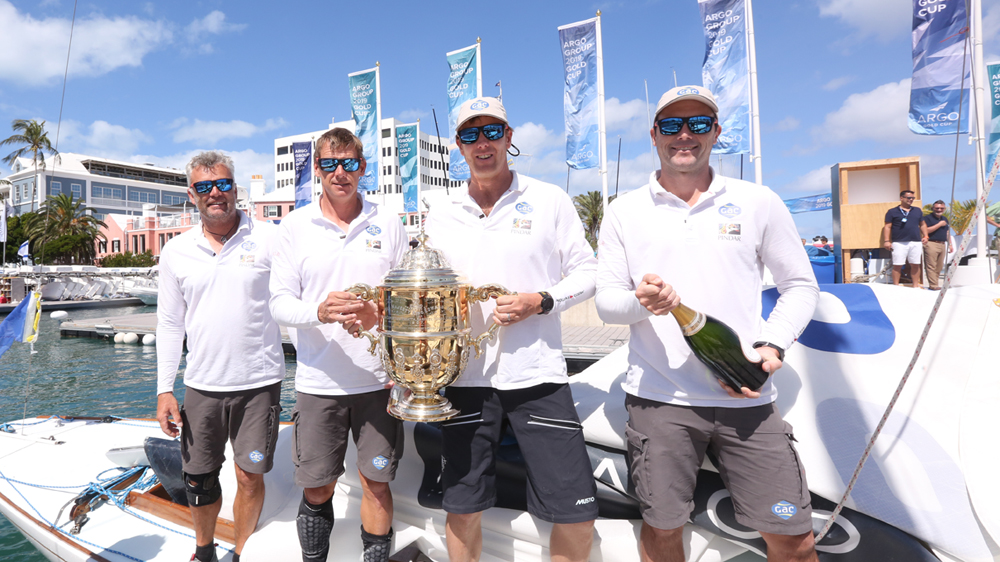 HAMILTON, Bermuda (May 11, 2019) — Just when it looked like Sweden’s Johnie Berntsson was going to even the score in the final of the 69th Argo Group Gold Cup and send the match to a fifth and deciding race, Ian Williams of Great Britain sailed across his bow and snatched away the victory.

In streaky wind conditions on Hamilton Harbour, Williams and his Team GAC Pindar crew rode a heading puff down on starboard tack and turned a three or four boatlength deficit into a half-length victory in the final 100 yards of the run to the finish.

The Team GAC Pindar crew, including Gerry Mitchell, Tom Powrie and Richard Sydenham won the final 3-1 as well as $30,000 of the $100,000 prize purse in the regatta hosted by the Royal Bermuda Yacht Club.

For Williams it was his second victory in Bermuda, and he becomes the 12th multiple winning skipper of the King Edward VII Gold Cup, joining the likes of Ben Ainslie of Great Britain, Taylor Canfield of the U.S. Virgin Islands, Chris Dickson of New Zealand and Berntsson himself.

Five-time America’s Cup champion Russell Coutts of New Zealand is the all-time winner of the Gold Cup with seven championships. Williams won his first Gold Cup in 2006 and he’s waited a long 13 years for the second.

“When I was getting into match racing, this was the first big event I came to in 1998. This was the one you really wanted to win,” said the 42-year-old Williams from Lymington, Great Britain. “To win in 2006 was huge for us, it was our first big win. I’ve been coming back since and always fell at the final hurdle. We traditionally struggle here. To win for the first time in 13 years is incredible.”

1525 Hours
Ian Williams has won the 2019 Argo Group Gold Cup for the King Edward VII Gold Cup trophy with a 3-1 win over Johnie Berntsson of Sweden.

On the run to the finish of Race 4 it looked like Berntsson was going to even the score. But Williams, to the right of Berntsson on the run, found a streak of wind and closed up a huge deficit.

For Williams it is his second victory in the Argo Group Gold Cup, joining the title he won in 2006. For Berntsson, it his is second consecutive runner-up finish. 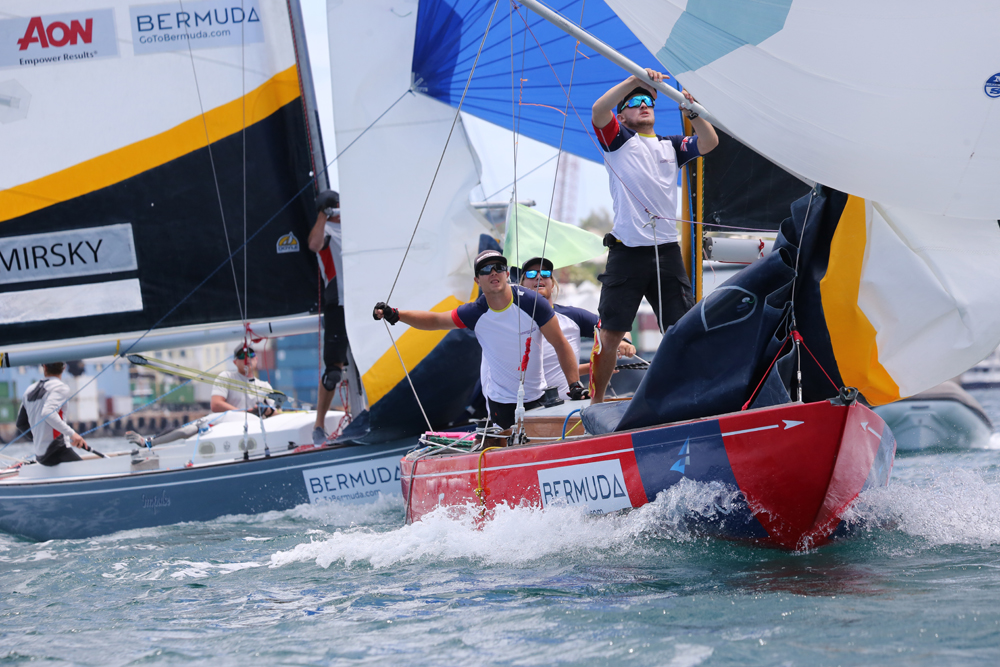 HAMILTON, Bermuda (May 10, 2019) — The 69th Argo Group Gold Cup advanced to the semifinal round this afternoon with Ian Williams of the U.K and Johnie Berntsson of Sweden moving to match point in their respective matches. Williams opened a 2-0 lead over Lucy Macgregor of the U.K. in one match and Berntsson leads Harry Price of Australia by the same score.

The penultimate round of the $100,000 match racing regatta hosted by the Royal Bermuda Yacht Club began after some exciting racing earlier in the day. In the quarterfinal round Price scored the upset of the regatta by beating his countryman, Torvar Mirsky, 3-2.

Mirsky raised eyebrows yesterday when he chose to race Price, the world No. 3-ranked skipper and a past Youth match racing world champion in the quartefinals. Common theory would’ve suggested Mirsky, as the No. 2 seed, pick a crew from the repechage round. But Mirsky reasoned that the repechage skippers were more practiced because they had sailed seven extra races. Last year, Mirsky advanced to the semifinals through the repechage round. But the gamble didn’t pay off.

“His motives were right, we’re the least experienced team out of everyone,” said the 23-year-old Price. “Obviously, we’re very pleased to get through to the semis. We had the toughest match out of the entire group, having to race Torvar, but we just took it one at a time. We won the first, lost the next two, then won the final two.”