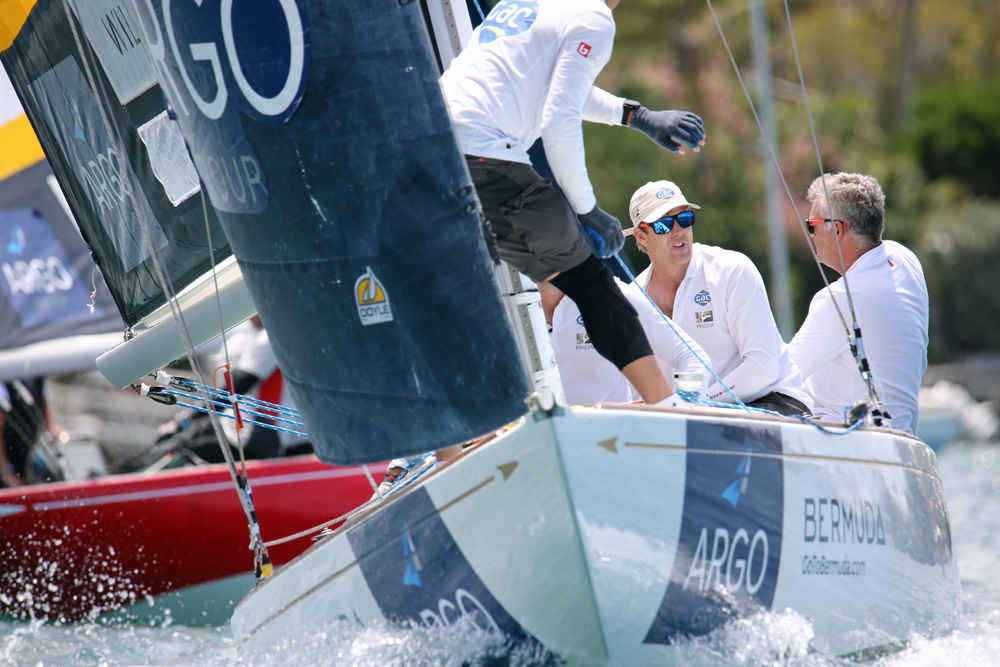 1545 Hours
Ian Williams and his Team GAC Pindar crew from the U.K. have advanced to the Quarterfinal Round of the 69th Argo Group Gold Cup as the No. 1 seed. They ensured their position after winning a close fought match in Flight 15 against Eric Monnin. The two crews were never separated by more than one boatlength, but Williams always held the upper hand to claim the top seed.

After Williams it would appear that Harry Price and Johnie Berntsson are also poised to advance to the quarterfinals. Each has 7 points from 10 races, with one to sail. Price races Kelsey Durham in Flight 16 and Berntsson races Mirsky in Flight 17. Even if they lose their respective matches, they should be through to the quarters.

The final quarterfinalist will come down to Mirsky or Chris Poole and the advantage would appear to lie with Mirsky. He has 6 points with two races to sail, against Monnin and Berntsson. A win in either race would give him 7 points and move him onto the quarterfinals. If he were to lose both races Poole would be the fourth skipper to advance.

1500 Hours
With just 10 matches remaining to complete the initial round robin, there’s a full-on scramble for the No. 1 seed and the top four who advance to the quarterfinal round.

Ian Williams is in the driver’s seat. His Team GAC Pindar crew have 8 points from 10 races and just one race remaining to complete the round robin. A win against Eric Monnin in the upcoming Flight 15 will ensure he earns the No. 1 seed.

There’s still a chance that Australian Harry Price could advance as the No. 1 seed but, after losing a key match to Chris Poole, he’ll have to win his remaining matches against Ettore Botticini and Kelsey Durham, and count on Williams losing to Monnin. That would create a tie and Price owns the tiebreak advantage over Williams.

Poole’s win over Price was key for his chance to advance to the quarters and avoid the repechage round. He now has 6.33 points with one match remaining, against Torvar Mirsky.

Mirsky’s chances of advancing to the quarters took a hit in Flight 14 when he lost to Durham. It was the first win for Durham in the regatta.

Monnin still has an outside chance of advancing to the quarters, but will have to win his remaining matches against Williams and Mirsky. Johnie Berntsson is also in the mix to advance. He has 6 points and two matches remaining, against Pauline Courtois and Mirsky. Wins in each could get him through.

For the crews that don’t finish among the top four there’s still a chance to advance to the quarterfinals. Tomorrow’s Repechage Round will see the top advance.

1330 Hours
We’ve advanced through Flight 12 and Ian Williams’s Team GAC Pindar holds the lead. Williams has finished 2-1 in his matches today and has 7 points from nine races. Williams beat Johnie Berntsson and Ettore Botticini and lost to Maxime Mesnil.

There was a delay to racing this morning due to shifty winds and breakdowns, but the wind has settled in and is blowing up to 15 knots, still with wide swings in the direction, although mostly from an easterly quadrant.

Another 18 matches are scheduled to complete the initial round robin. Be sure to check the results page and the flight pairings page for the latest results and schedule.

Youngster Harry Price and his Australian-based Down Under Racing Team took the lead after yesterday’s action-filled day with 5 points from six races. He holds the tiebreak advantage over Ian Williams and his Team GAC Pindar crew from the U.K. by virtue of beating him in their Flight 6 match. Price said it was the first time he’d ever beaten Williams in a match race.

The wind this morning is more from the east, meaning that it’s blowing the length of Hamilton Harbour rather than across it like yesterday’s northwesterly. There’ll probably be plenty of shifts to capitalize on while ranging in strength from 6 to 12 knots.

The first flight of racing today is Flight 10, which sees Torvar Mirsky racing Ettore Botticini, Eric Monnin against Nicklas Dackhammar, Maxime Mesnil versus Pauline Courtois and Johnie Berntsson taking on Williams in a match that could have implications as to who advances to the quarterfinals and who has to race the Repechage Round.

Racing is scheduled to get underway at 1000 hours on Hamilton Harbour.