HAMILTON, Bermuda (Mar. 16, 2020) — Organizers for the Royal Bermuda Yacht Club’s Bermuda Gold Cup match racing regatta have postponed the celebratory 70th running to October due to the outbreak of the novel coronavirus COVID-19 and travel restrictions imposed around the world.

The Bermuda Gold Cup is rescheduled to October from May, the dates to be announced.

“This decision is based on the uncertainty and state of world travel and is made in the interest of the health and safety of the competitors, event organizers and the island of Bermuda,” said event chairperson Leatrice Oatley, a Past Commodore of the Royal Bermuda Yacht Club. “We look forward to hosting the 70th anniversary event in October.”

The Royal Bermuda Yacht Club wishes to apologize to all who may be affected by this decision. 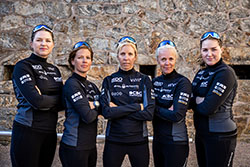 HAMILTON, Bermuda (Feb. 18, 2020) — The Royal Bermuda Yacht Club's 70th Gold Cup for the King Edward VII trophy returns to its traditional format this year with a field of 16 crews plotting to win the venerable trophy and the lion's share of the $100,000 prize purse.

Scheduled May 11-16, the King Edward VII Gold Cup is the second World Championship-level event of the World Match Racing Tour's 2020 calendar. Such designation affords competitors greater points on the world tour leader-board and their qualification towards the WMRT Grand Final.

For the first time since 2015 the King Edward VII Gold Cup will feature a supersize 16-team format. The past two events in 2018 and '19 featured 12 teams as the regatta reestablished its place on the calendar after the destination island hosted the America's Cup in 2017.

Among the 16 entrants are three past Gold Cup champions, including reigning champion Ian Williams (Lymington, England), two all-women crews, including the World No. 1 and No. 2-ranked skippers, and three dynamite youth crews under 25 years of age, including the reigning Youth World champion.