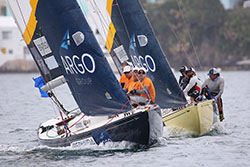 HAMILTON, Bermuda (May 11, 2018) - Taylor Canfield’s USone Sailing Team has stepped out to a 2-1 lead over Johnie Berntsson’s Swedish crew in the Final of the 68th Argo Group Gold Cup. The winner of the match will be the first to score three points and will earn $30,000 of the $100,000 prize purse.

While Canfield and crew moved to match point so did Torvar Mirsky’s Australian crew in the Petit Final. Mirsky won the first race against Lucy Macgregor’s team from Great Britain in the first-to-two points match.

The two matches completed a frantic Friday at the venerable match racing regatta. The day began with the four pairs in the Quarterfinals. After a break for lunch the Semifinals were conducted followed by the beginning of the Final and Petit Final. Just as the racing was wrapping up shortly before 6:30 pm a 25-knot squall came ripping across Hamilton Harbour, putting an exclamation point on the day.

Canfield and Berntsson advanced to the Final by first winning their Quarterfinal matches against Ettore Botticini of Italy and Charlie Lalumiere of the U.S., respectively. Berntsson dominated Lalumiere in winning 3-0. And although Canfield also won by a 3-0 score, the match against the young Italian wasn’t as one-sided as the score might indicate.

“I felt we started well,” said the 23-year-old Botticini. “He really only beat us in one start. But he was quicker in maneuvers and sailed faster.”

The other Quarterfinal matches saw Macgregor defeat Joachim Aschenbrenner of Denmark, 3-1, and Mirsky take down Nicklas Dackhammar of Sweden, 3-0. Mirsky won each race of his match by working the right side of the upwind legs. Not only was he protecting starboard tack advantage but he also felt the wind strength in the south/southwesterly breeze was better on that side.

Macgregor won the first two races against Aschenbrenner by getting a penalty on the Dane in the first race and then coming from behind to win the second race. Aschenbrenner won the third race handily but Macgregor sealed the match in the fourth race with a wire-to-wire win.

In the Semifinals Canfield beat Macgregor 3-1. The reigning Women’s match racing world champion was the first to pin a loss on Canfield in this regatta. Macgregor won the start and extended all the way around the course for a comfortable win. But she was undone by some bad luck in the next two races.

In Race 3, as both boats approached the windward mark on port, she was penalized for failing to keep clear. She decided to unload the penalty by tacking and bearing away onto the run, but that allowed Canfield to jibe away and open a three-boatlength advantage that he wouldn’t relinquish.

In Race 4 Macgregor won the start to the right of Canfield and then quickly tacked away to the right side, which seemed favored most of the day. Canfield was on her windward quarter as the pair approached the VIP hospitality boat that was anchored. Macgregor said that Canfield was too close for her to tack and with the VIP boat swinging on its anchor she wasn’t quite sure how to play it. She wound up sailing below the boat while Canfield sailed to windward. Macgregor said that she didn’t lose that much ground in the incident, but it put her on the back foot and Canfield held on for the win.

“We might’ve been able to luff him but he was pretty far forward on us,” said Macgregor. “Both of those instances are reflections of lack of time racing. We haven’t done much match racing in the past year and in both of those instances you need quick decisions. Taylor and his team sailed really well, they’re tough competitors. Both of us, once ahead, were able to extend. The start was super important; it’s hard to overtake if behind.”

In the deciding race Berntsson led Mirsky onto the racecourse. Mirsky initiated a tacking duel that saw the crews tack seven times halfway up the first leg. Berntsson just led around the windward mark and the pair was nearly even as they began the second upwind leg, but Berntsson was able to find better pressure on the right side of the racecourse to extend to his lead to four-to-five boatlengths at the second windward mark, which he would hold onto for the victory.

“That was proper match racing. Full credit to Johnie and his boys, they beat us fair and square,” said Mirsky after the match. “I haven’t been in a match that close in a long time. It was good action.”

In Race 1 of the final Berntsson held a slim lead around the first lap. Up the second windward leg Canfield worked the right side of the course to cross on starboard by less than a length. Canfield held a narrow lead down the second run and was able to get a penalty on Berntsson for windward/leeward just before the second leeward gate. That allowed Canfield to win the race and go up 1-0.

Berntsson evened the score in the second race when he led all the way around the race track. Berntsson also led the third race but again had a penalty to unload from a pre-start incident. Canfield kept close behind so that when Berntsson did his penalty turn on the finish line Canfield was able to sneak past for a 2-1 lead.

“The biggest thing is when we were behind we stayed close and pushed to the finish line,” said Canfield. “Even though we lost Race 2 we always kept the pressure on. Same in Race 3. Even though he was ahead he had a penalty and we kept pushing to close the gap so that he didn’t have enough room at the finish line to do his turn. Those races when we’re ahead we’re going to try and open the lead as much as we can and when we’re behind we’re going to push as hard as we can to keep it close.”

Racing resumes Saturday morning at 10:00 am with at least one more race in each the final and petit final. Now it’s up to Berntsson and Macgregor to extend the matches.

The Argo Group Gold Cup is sponsored by the Argo Group, an international underwriter of specialty insurance and reinsurance products in areas of the property and casualty market. Additional sponsors include the Bermuda Tourism Authority, Bacardi, Guy Carpenter, RenaissanceRe and Aon Benfield.

ABOUT ARGO GROUP INTERNATIONAL HOLDINGS, LTD.
Argo Group International Holdings, Ltd. (NYSE: ARGO) is an international underwriter of specialty insurance and reinsurance products in the property and casualty market. Argo Group offers a full line of products and services designed to meet the unique coverage and claims handling needs of businesses in two primary segments: U.S. Operations and International Operations. Argo Group's insurance subsidiaries are A. M. Best-rated 'A' (Excellent) (third highest rating out of 16 rating classifications) with a stable outlook, and Argo Group's U.S. insurance subsidiaries are Standard and Poor's-rated 'A-' (Strong) with a stable outlook. More information on Argo Group and its subsidiaries is available at www.argolimited.com.