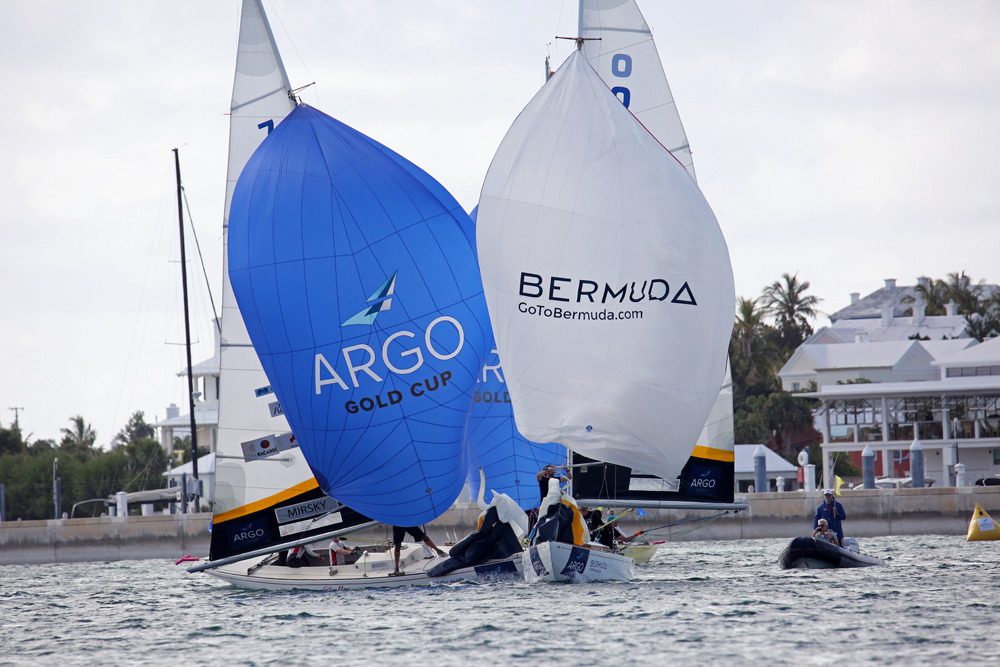 HAMILTON, Bermuda (May 7, 2019) — An active first day of racing at the 69th Argo Group Gold Cup saw 36 matches completed across nine flights of racing and led to a first-timer holding the Day 1 lead.

“I’m really impressed with Harry,” said Williams, who won the Argo Group Gold Cup in 2006 when Price was 11 years old. “The boats are difficult and there’s a lot to get your head around. So good on him.”

“Bermuda gave us an interesting day,” said Price. “It was quite shifty and with the windward mark being tucked underneath the buildings, that made it anyone’s race. We struggled to win the pre-starts but managed to get off the line even. Then we sailed our own race and did well to pick the shifts and get the lead.”

Holding third place is Chris Poole of the U.S. with 4.33 points, while Johnie Berntsson of Sweden and Torvar Mirsky of Australia are tied for fourth, each with 4 points.

After the top five Eric Monnin of Switzerland and Maxime Mesnil of France each have 3 points, but Monnin holds the head-to-head tiebreaker. Nicklas Dackhammar of Sweden is eighth with 2 points, Lucy Macgregor of the U.K. is ninth, Ettore Botticini of Italy is 10th, Pauline Courtois of France is 11th and Kelsey Durham of Bermuda has yet to win a race in his match racing debut.

“We knew a few rules of match racing before today, and now we know a lot more,” Durham said at the end of the day. Durham was disqualified from his third race when he failed to complete a pre-start penalty turn after taking to the racecourse.

“We were happy to get out of Day 1 with more wins than losses,” said Williams. “For us, we just have to keep pushing and get through to the quarterfinals and get a bit of rest. Us old boys need our rest.”

The worst collision of the day involved Poole and Botticini in their match in Flight 3. Poole, on starboard, attempted to duck the port-tack Botticini to get to the other side. But Botticini appeared to want to duck Poole and also bore away. The two crews were essentially headed straight at each other before both helmsmen pushed the tiller away from them. The boats headed up into a collision that damaged the boom and gunwale of Botticini’s boat.

A protest hearing on the water after the race saw Poole penalized one point for the incident. But he filed a subsequent protest that was heard after racing and the international jury reduced his penalty to .67 points while also penalizing Botticini .33 points. The jury penalized both crews under Rule 14, failing to avoid collision. If not for the penalty, Poole would be equal on points with Price and Williams.

“We were on starboard on the layline and tried to duck and go behind him, but then he bore off,” said Poole. “We tried to head up and avoid the collision but then he headed up too.”

Botticini said that in the resulting collision Poole’s bow wound up between the boom and the deck of his boat. “It was a huge crash,” said Botticini. “Thankfully, everyone was safe.”

Price’s youthful crew could likely party all night and still find their way around the racecourse. They showed a deft today touching picking their way through a very shifty racecourse. The forecast conditions of 15 to 20 knots never materialized because the frontal system moved through quicker last night than expected.

That left behind a shifty north/northwesterly that blew between 8 and 12 knots while swinging through an arc of 30 to 50 degrees. No lead was safe, but conversely, no deficit was too large to overcome.

“We tended to favor the left side,” said Berntsson’s tactician/bowman Anders Dahlsjo, “but the right side was working, too.”

Racing resumes tomorrow at 1000 hours with 30 matches scheduled to complete the round robin. The Bermuda Weather Service is forecasting winds from the northeast at 8 to 12 knots, meaning another head-scratching day for everyone involved.

Argo Group International Holdings, Ltd. (NYSE: ARGO) is an international underwriter of specialty insurance and reinsurance products in the property and casualty market. Argo Group offers a full line of products and services designed to meet the unique coverage and claims handling needs of businesses in two primary segments: U.S. Operations and International Operations. Argo Group’s insurance subsidiaries are A. M. Best-rated ‘A’ (Excellent) (third highest rating out of 16 rating classifications) with a stable outlook, and Argo Group’s U.S. insurance subsidiaries are Standard and Poor’s-rated ‘A-’ (Strong) with a positive outlook. More information on Argo Group and its subsidiaries is available at www.argolimited.com.