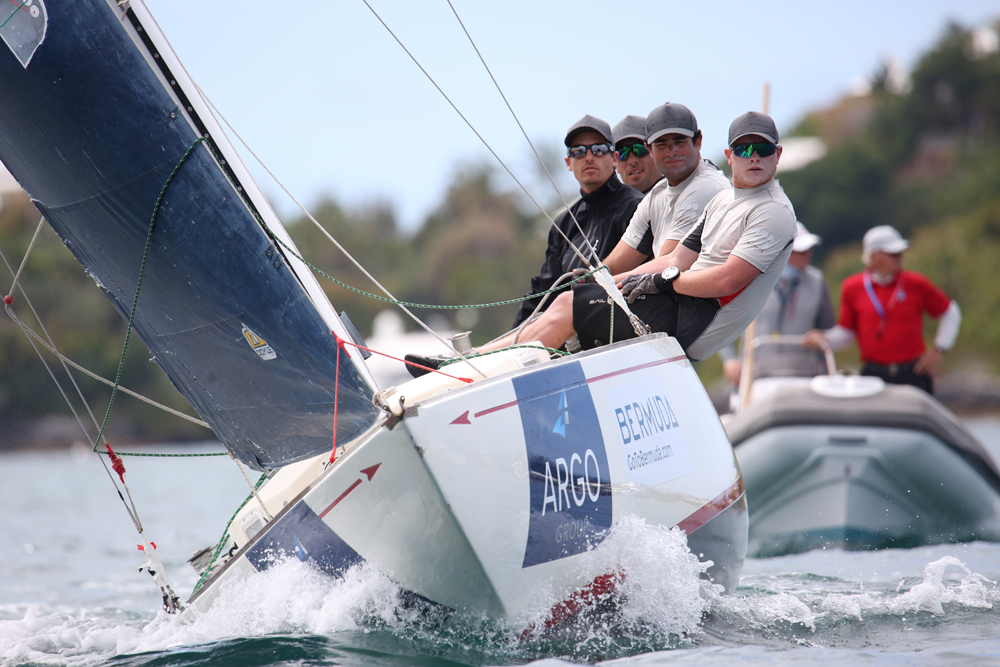 HAMILTON, Bermuda (May 8, 2019) — Ian Williams and his Team GAC Pindar crew from the U.K. won the initial round robin stage of the 69th Argo Group Gold Cup and advanced to the Quarterfinal Round as the No. 1 seed.

Williams’s crew posted a 4-1 record today after yesterday’s 5-1 mark to advance with the top score of 9 points from 11 races. After yesterday’s racing Williams said it was important for the crew to advance to get some well needed rest. After today’s tight racing, the day off will be a welcome respite.

“It was close racing all around, I think we were fighting from behind all day long,” said Williams, who won the Argo Group Gold Cup in 2006. “You take the small gains when you can and just keep chipping away. It’s good to have tight racing, especially in the round robin. You can’t win them all but you take the ones you can and keep going forward.”

Williams is joined in the quarterfinals by Australians Torvar Mirsky and Harry Price and Johnie Berntsson of Sweden. Mirsky finished the round robin at 8-3, the same record as Price, while Berntsson advanced with a 7-4 record. Mirsky wound up the No. 2 seed because he beat Price in their match yesterday.

“I’m really pleased with how the boys are going. Everyone here is trying to find their feet, trying to build up to the final stages,” said Mirsky, the 32-year-old who won the 2017 Open match racing world championship. “My focus has been about crew work and not results. You want to win all of the races, but you also want to work on the team and get better each day. It’s all about building up to the final round and being sharp.”

The conditions today were in contrast to yesterday. Instead of a northwesterly wind blowing across Hamilton Harbour the wind was out of the east, meaning it was blowing the length of the harbour. There were still shifts of up to 30 degrees but the strength was a bit steadier at 8 to 14 knots.

“Yesterday and today were similar in that the wind was very shifty,” said Mirsky. “I thought today was harder to pick the shifts. Yesterday you could see the trends a bit more. But with the boats being quite long and skinny, no matter what you do you end up in situations at mark roundings with the umpires and playing the momentum game and using overlap to get to the next shift.”

The on-water umpires issued 14 penalties today, nine less than yesterday, and while Mirsky mostly excelled he stubbed his toe against Bermudian Kelsey Durham, who defeated Mirsky for his first victory in a professional match racing regatta. Durham and crew won the start and fended off Mirsky around the first lap, and then extended around the second lap for what turned out to be an easy win.

“It felt great to lead at the start and pull away through the race,” said the 25-year-old Durham. “Today was a much better day for us. We only had one penalty, as opposed to four yesterday, and just felt much more comfortable. You have to be aggressive in the start and know the rules, and we’re just learning and getting better all the time.”

Durham still has an opportunity to advance to the quarterfinals through the repechage round robin, where he’ll be joined by Chris Poole of the U.S., Eric Monnin of Switzerland, Nicklas Dackhammar of Sweden, Maxime Mesnil of France, Lucy Macgregor of the U.K., Pauline Courtois of France and Ettore Botticini of Italy. The top four finishers advance to the quarterfinals.

Like Mirsky, Macgregor advanced to the semifinals last year after the repechage round. It gives the crews an opportunity to continue honing their crew work and tactics while the four crews that advanced after the opening round robin might lose just enough focus to fall afoul. Many of the crews here haven’t raced as often as they would like as jobs and family become more important than who has luffing rights.

“We haven’t done a match racing regatta since last August, so we still have lots to work on,” said Macgregor, the three-time Women’s match racing world champion. “We had a better day today than yesterday, the boathandling is good, but there are still a number of areas to improve, how we see the racecourse and how we get around it. Gone are the days when we were in full campaign mode and sailing all the time. The day job gets in the way nowadays. But the repechage round will be good and tough. We’re looking forward to it.”

Racing resumes tomorrow at 0930 hours with the Repechage Round. Principal Race Officer David Campbell-James is scheduling five and a half hours to complete the round, which will then be followed by the Pro-Am. Northeasterly to easterly winds are again in the forecast, between 10 and 15 knots.

Argo Group International Holdings, Ltd. (NYSE: ARGO) is an international underwriter of specialty insurance and reinsurance products in the property and casualty market. Argo Group offers a full line of products and services designed to meet the unique coverage and claims handling needs of businesses in two primary segments: U.S. Operations and International Operations. Argo Group’s insurance subsidiaries are A. M. Best-rated ‘A’ (Excellent) (third highest rating out of 16 rating classifications) with a stable outlook, and Argo Group’s U.S. insurance subsidiaries are Standard and Poor’s-rated ‘A-’ (Strong) with a positive outlook. More information on Argo Group and its subsidiaries is available at www.argolimited.com.